Three recent publications (HNL JIM 2015, HNL CVI 2015, and CVI 2017) showed the superiority of HNL as a diagnostic and discriminatory means in infectious disease. Reviews on HNL were published in  2018 and 2019 (HNL UJMS, HNL JALM). Recent important publications on HNL are the multimarker approach-publication in which the diagnostic performance was strengthened by combining with other biomarkers such as IP-10 (HNL JIM 2019) and most recentlt the publication showing the utility of plasma measurement of HNL in combination with TK1 (Thymidine kinase 1) in the distinction between bacterial and mycoplasma (HNL and Mycoplasma 2020).

HNL is currently in focus, but our ambitions are to build further on our long-standing research and experience on the use of  assays of specific secretory proteins of neutrophils and eosinophils for the purpose of monitoring the activity and turnover of these important inflammatory cells in disease. These proteins are the eosinophil proteins ECP, EPO, EDN and the neutrophil proteins MPO and PLBII-P

!!! Our website and e-mail were hacked and did not work between December 8 to December 14. Please resend any messages during this period!!!

We have constructed an HNL assay that uniquely measures the dimeric form of HNL. The HNL Dimer has its origin in neutrophils. As shown in our latest publication HNL Dimer is a powerful diagnostics in sepsis and Covid, but most importantly it is the only biomarker known that is rapidly reduced in plasma as a response to successful antibiotics treatment of patients with sepsis. (HNL Dimer in sepsis).

Improve the diagnostic potential of HNL even further: In our recent publication on fMLP-activated whole blood we showed that it was possible to achieve an even greater diagnostic distinction between acute infections caused by bacteria or virus by adding some other biomarkers to the algorithm. The distinction approached an unlikely 100% sensitivity and specificity by adding either serum concentrations of IP-10 and/or TRAIL to the diagnostic algorithm. In the same report the algorithm that had replaced HNL by CRP was good but obviously inferior to the inclusion of HNL Take a look at the figure at the bottom showing this by comparing areas under the ROC curve.

An important notice about the assay of eosinophil and neutrophil granule proteins in serum. Avoid blood collection tubes containing clot activators in the form of silica microcrystalls!!!The measurements of secretory granule proteins such as HNL, ECP and others in serum require strict standardization of the sampling procedure as to time and temperature in order to avoid large variations in results. In previous studies SST-tubes were often used with success. However, since some years such tubes have been modified in order to shorten coagulation time, mostly by adding larger amounts of silica microcrystals to the tubes. Such crystals seriously interfere with the release of the granule proteins. In tubes from some vendors this interference may result in reduction in release and in tubes from other vendors the result is accellerated release.

Our novel EPO ELISA has been successfully published. We recently launched a specific ELISA for the measurements of EPO (Eosinophil Peroxidase) in any human biological fluids or cell extracts. The assay is For Research Use Only (FRUO). EPO is regarded as the only 100% specific marker of human eosinophils and is not found in any other cell in the human body. Our EPO ELISA is based on monoclonal antibodies produced against EPO purified from human eosinophils. The unavailability of commercial immunoassays for EPO has precluded so far the investigation of the usefulness of this biomarker to reflect eosinophil involvement in human disease. By the launch of our specific and sensitive EPO ELISA we have overcome this problem and look forward to learn more about this exciting new biomarker. Indeed our assay has been used in a recent publication in the prestigious journal, Journal of Clinical Investigation (https://www.jci.org/articles/view/95693).

How to treat bacterial infections?

Antibiotics resistance is a serious and fast developing global problem. If we do not act we may not any longer be able to successfully treat life threatening infections.

What can we do to slow down this development?

HNL is the superior means to distinguish between acute bacterial or viral infection.

HNL was shown superior to currently used biomarkers such as CRP, procalcitonin and CD64 expression on neutrophil granulocytes. Sensitivities and specificities achieved were between 90-95%. By adding some other biomarkers to an algorithm the diagnostic performance of HNL increased to almost perfection (JIM 2019) 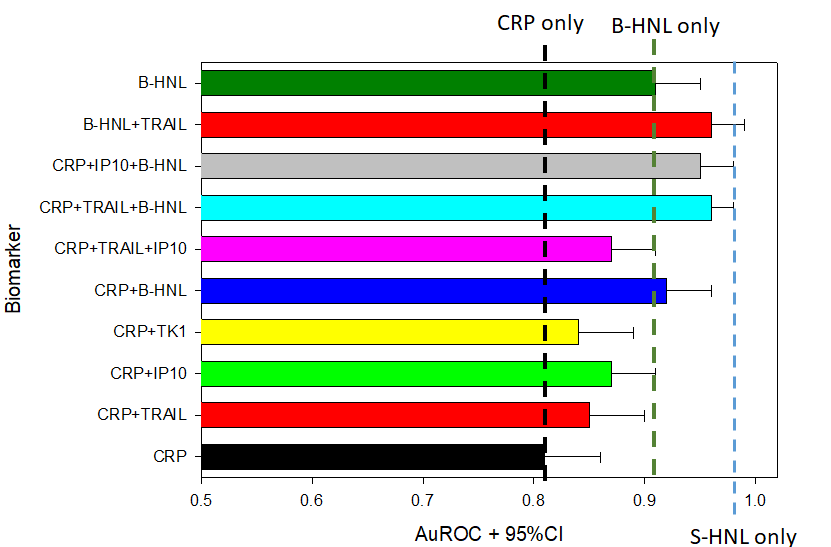 HNL and NGAL are two names for the same protein. An additional name is lipocalin 2.

The superior diagnostic performance of HNL in infectious disease is achieved in serum or after activation of neutrophils in whole blood.

In urine HNL may be used to diagnose acute kidney injury and infection in the urinary tract. The trick is the antibody configuration of the HNL assays. By using various combinations of polyclonal and monoclonal antibodies produced against native HNL, specificities as to cellular origin and cause of the disease are obtained